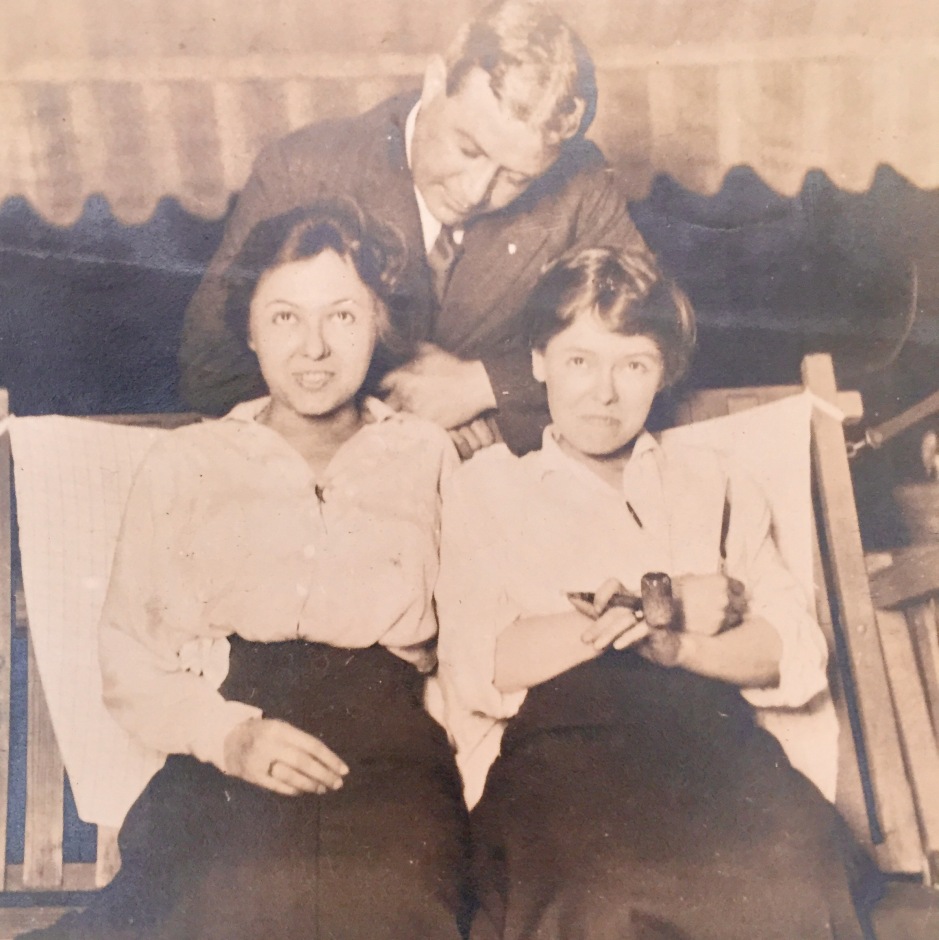 I was seventeen the first time I read “A Rose For Emily,” William Faulkner’s eerie tale of tribute to a spinster with attitude. I loved it. The story had just the right blend of macabre romance and Southern sensibility to appeal to my teenaged self, at once idealistic and sentimental. What’s more, I felt a whisper of warm recognition, even affection (despite the arsenic), for Emily Grierson and the “big squarish frame house” where she lived alone in early 20th century Mississippi. I knew that close musty air, the heavy walnut bed beneath rose-shaded lights, the Victorian trinkets and the lace doilies on coffee tables and upholstered chairs. In fact, I knew Emily. I once had a spinster of my own, my Aunt Louise, who walked with a cane and wore frumpy dresses, cameo brooches, pearls, and hats. Always a hat, and for Sunday Mass, a netted veil to cover her impish face. Above, see Louise as a young woman holding a pipe–surely just a play thing, a photographer’s harmless prop.

Louise was my father’s aunt, my great aunt, though when I was very young that relationship failed to compute. She was just Weezer (pronounced Wee-za), sometimes “the Weez,” and I loved her the way my friends did the grandmothers they visited on Sundays, shared jello with at Morrison’s Cafeteria, or listened to on the phone with half an ear (Yes, Weez, I’ve done my homework and passed a healthy, ahem, stool today). Great Aunt maybe, but in effect, Weezer was my grandmother. My father’s mother died in 1918 of what’s sometimes called the “Spanish Flu” (though its origins have since been traced to Kansas), a victim of our nation’s first pandemic. My father was four years old. Weezer, thirty-something and single, stepped in to raise him and his brother.

A staunch Catholic, by the time I came along Weez lived three blocks from the cathedral and parochial elementary school I attended. On afternoons my mother was otherwise occupied, I would sling my book bag over my shoulder and walk those three blocks in my plaid dress and saddle oxfords. Weezer would greet me at her doorstep with a smile (not much of a hug on account of germs–pandemics will do that), ask me about my day, and dodder off to dish up a special Weezer-snack: Underwood Deviled Ham on Sunbeam bread.

You were expecting Tollhouse cookies? A slice of peach pie or at the very least, homemade fruitcake? Nope, Weezer wasn’t much of a cook. I’m not sure she even owned a mixing bowl. Born the third of four daughters in 1886 in Greensboro, Georgia, Louise Bourne Bickers was a working girl. I’m not sure how she ended up in Atlanta, but I know she and two of her three sisters did. For fifty plus years, Weezer worked downtown at the headquarters of Beck and Gregg Hardware. She was good at her job. Her obituary mentions that for a time she served as “Mr. Beck’s private secretary.” Early on, Weezer needed the money, the stability to weather the Depression with her adopted sons, but as I sift through some of the letters and memorabilia that migrated from her attic to my mother’s and on to mine, I have to wonder. Did something more keep Weez on board at Beck and Gregg? Could it be my great aunt kept taking dictation and typing up work orders even as her septuagenarian joints protested, because she, like Faulkner’s Emily, had a dangerous liaison?

“Dear Louise …” writes one Paul B. Strickland in shaky blue script. “Being a poor hand at selecting presents, it is hoped the enclosed will be acceptable as it carries my wish for you the merriest of Christmas greetings … It would be best if you would use it for something you desire for yourself. Very pleasing to me but use it as you wish and I will be happy. Sincerely, with love, Paul. December 25th, 1961.”

This is the one missive in which Paul addresses Weezer as Louise. Otherwise, it’s “Miss Bickers,” though tellingly, he signs off “Paul,” and “with love,” in each of the letters I’ve found. In 1962 he concludes “with a heart full of love to you.” Family letters as early as the 1930s mention Mr. Strickland. My uncle, planning a visit home from Ohio in September, 1953, writes: “Weez–Reckon Paul would let you off Monday afternoon?”

Paul, it seems, was the boss man.

My father used to joke about catching Weezer and Mr. Strickland unawares when they were younger. Now and then, he came upon them sharing the living room couch. If Mr. Strickland had his arm around Weezer’s shoulders, he would do the quick head-scratch retraction, as if they were naughty teenagers. My older sister and brothers remember his Sunday visits in later years. Dressed in coat and tie, Mr. Strickland would sit and smile, always at a proper (social) distance from Weez, on a dusty glider on her front porch. But he said little. By this time, both had retired. Paul lived alone in the Georgian Terrace in midtown. Weezer had moved six miles north to her big squarish house. After seeing each other over their second cup every day for decades, they must have felt oceans apart.

Still they kept visiting, and after Weezer lost a second sister to the 1962 Air France crash at Orly, Mr. Strickland was right by her side, comforting her. Why did they never marry? Wherein lay the danger in this liaison? Was it simply against workplace etiquette? Maybe early on Weezer hesitated to inject a new father figure into what was already a dysfunctional situation for my father and uncle. Could be Mr Strickland was reticent about engaging in that dysfunction, though there’s no evidence of that. But later, ten, twenty, thirty years later? My mother’s theory, which no doubt trickled down from my father’s clan, was that Weezer was afraid of passing along the tuberculosis she contracted as a girl (germs, at it again), that even after being cured she vowed never to kiss a man. Hmm. My brother Tom posits that perhaps Mr. Strickland was, God forbid, a Protestant. Might Weezer’s fierce faith have led her to resist his advances, maybe even to lean on a certain germophobia to soften the blow while avoiding a “sinful” entanglement?

My mother’s attic, though teeming with rosaries and relics of the saints, has not provided a clear answer. Weezer was a prolific letter writer, or letter-typer, I should say. She tapped away with dry wit on Beck and Gregg letterhead, often annotating and always signing by hand. Two weeks before my parents’ 1941 wedding, she needles my father about expensive gifts and potential guests and updates him on a family controversy concerning their write-up for the paper. “When I get ready to announce my engagement …” she writes. “I’m going to write it myself, or get St. Peter to do it.” And handwritten on the reverse is this: “Will there be any question about the priest marrying you in Sara’s back yard? Better see!”

My mother was a Baptist. The logistics of getting them hitched by a proper priest in her small Florida town created many a sleepless night for my father’s kin. The idea of their marrying at all gave them apoplexy. In this day of destination weddings and bachelorette weekends and TV rose ceremonies, it’s easy to look back and laugh at their anxiety, but to Weezer and her family, marriage was more sacrament, less party. The traditions of the Church mattered to them. A lot.

And yet, in the end Weezer gave my parents her blessing. She bent the rules for the man she’d raised and loved like a son. Why not do as much for herself? And who even was this man my surrogate grandmother loved in secret? I ran a Google search. Nothing. On Ancestry.com I found a possible match for a Paul Strickland, born June of 1883, died August 15, 1970. Made sense. My clearest memories are of visiting “Mr. PBS” in a nursing home. Beyond that, no updates, no ancestry leaf-hints. Far from satisfied, I went to the downtown library and found (on microfiche) this Mr. Strickland’s obituary. It revealed that he’d resided in Atlanta, that seven years prior he’d retired as vice president from Beck and Gregg Hardware (bingo), and that he was survived, as Weezer would be two years later, only by nieces and nephews.

Then this: “Services for Paul B. Strickland, 87 … will be held at Concord Baptist Church at 3 pm.” Baptist. And retired at age 80–who works until 80? A man who prefers the company of a co-worker to his empty apartment.

Late in her spinsterhood, Faulkner’s Emily Grierson finds a sweetheart in Homer Barron, a Yankee foreman on a scalawag-inspired construction project. Some in town are hopeful Emily will marry at last. Others, namely her out-of-town kin, are scandalized by the idea of Emily taking up with a Yankee. Their outrage, stoked by Emily’s pride, leads to a haunting conclusion some see as a twisted sort of triumph for Emily. Faulkner later said this about his story: “I pitied [Emily], and this was my salute … to a woman you would hand a rose.”

I don’t pity my Aunt Louise. I admire her. She stood down a pandemic, bound together a splintered young family, supported her sisters and cared for aging parents. In a time when women didn’t much, she built a career for herself and found fulfillment in it. She lost two sisters far too young and outlived a third. And somewhere across town–who knows, maybe just where she wanted him–she had a partner through it all.

December, 1949: Weezer writes my father to thank him for sending along a Christmas card and a photo of my three oldest siblings. “There is a Santa Claus!” she begins, and goes on to describe the dialogue that transpired among her and her co-workers as she passed around the card:

“First Man: ‘Who are those children?’

First Lady: ‘Whose children, All three so pretty?’

This routine continues with another “Lady” and three Men giving like responses before Weezer signs off, with love. Then, as if she just can’t hold it in, she types a P.S. for my dad: “Mr. PBS says they are Fine Children.”

I feel I know my great aunt Louise a little better now, Louise the woman, the survivor–feisty, hard-working, proud, and passionate in ways her faith and her scarred past caused her to hide.

A dozen roses to you, Weez. I bet you smoked that pipe with abandon.