This week, Tuesday, marks nine years since we lost my oldest brother to cancer. I was surprised to find no photos of him in my laptop library. It’s an old laptop, a very s-l-o-w laptop, jammed with years of documents and images and videos. Every day–nay every hour–I curse the darn thing and the infernal color wheel I once found so cute. Still, no photos of Ed. And if not for those my nephew, “Little Ed,” tags me in as he loyally uploads old Attic prints and slides (see Vietnam photo above), there wouldn’t be any in my Facebook library either.

Nine years ago I didn’t have a Facebook library. Nine years was two laptops, three high school commencements, two college grads, my mother’s passing and four smart phones ago. For Ed, nine years was dozens of family birthday cakes, his youngest daughter’s wedding, a sixth grandchild, hundreds of youth sports matches and innumerable missed opportunities to coin a pun or crack a joke. Wait, hasn’t he been there all along? My memory plays tricks. I can’t picture my mother’s Saturday breakfast table without him smirking at me as he sneaks a few dollops of whole wheat batter onto the back of the griddle (sacrilege this was, to alter our mother’s famous pancake recipe). And have we, our extended family, really had seven reunions in the north Georgia mountains, where Ed loved to hike or rock on the porch with the latest Stephen King novel, without him?

Yes. And no. He’s been physically absent these nine years, yet my mind subs him in. Maybe that’s what we mean when we say someone is “with us in spirit.” Some would say that Ed, like my father and mother, really is with us in some mystical way. I want that to be true. And sometimes, when the wind blows a certain way or the surf crashes just so at the beach where Ed used to beat us all at whiffle ball, I believe it. Other times, I’m not so sure. It seems more the strength of our memories that conjures him. I drive along a desolate stretch of highway in south Georgia and he’s beside me, already laughing at his own joke, the one we both know is coming–“Marth, it’s Vuja Dé all over again! I’m absolutely sure I’ve never been here before … ” Or, I play back messages on the land line and know his voice will be next, the voice of his last months, a little mournful yet tinged with his trademark silliness: “Hey guys, Uncle Cancer here …”

Ed’s going was not easy. Stage Four colon cancer at 58, a lot of pain, a course of chemo, weight lost but hope gained, more pain, finally the message that the doctors had done everything they could, and well, you can imagine the rest. His going was tough in other ways, too. Middle age for him was marked by ups and downs, job uncertainty, secrets kept, promises broken. In short, these were troubled times, as much for his wife and kids as for Ed, and as he slipped away from us, we struggled both to understand his mistakes and to deal with the conflicting emotions they rustled up. To his credit, Ed faced his illness with quiet courage, even a sort of resignation. He came to see his illness and impending death as a sort of atonement for past transgressions. I hated that, refused (refuse!) to believe it, but I let it go. It brought Ed strength somehow, and a certain peace.

My mother, 87 when he was diagnosed, took in his issues with a kind of sad detachment that seemed to help her survive the loss of her oldest son. “His life wasn’t fair, he was so sensitive as a child, he had no luck …” I have my own theory (we are cursed with theorizing, our family, and thus insomniacs, most of us). Ed was 18 when the USA entered the conflict in Vietnam. He graduated from college, joined the Marines, married, and at 22 was shipped off for active combat. He quickly became a Lieutenant, forward observer for his platoon. He served his country well but in a way, Mom was right. Ed was sensitive, the smiling clown with a weeping heart, and maybe not cut out, emotionally, to be a Marine. He came home to his wife and newborn son more reserved, a little twitchy, less motivated, if still the punster he’d always been. No one talked much back then about PTSD, but I have to wonder.

I was eight when Ed left for Vietnam. We exchanged letters. Though the Attic has produced none that I sent him, I have a few Ed penned home to me. They are brief (what do you say to your baby sister when you spend your days sniffing out a wily enemy in a strange hot land?) Still, the tone is telling. Here, from July, 1969 (the Helen mentioned was my childhood friend)– 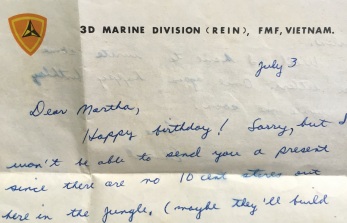 … And test page for my coloring projects

“Happy Birthday! Sorry, but I won’t be able to send you a present since there are no 10 cent stores out here in the Jungle. How are you? I’m sure you and Helen are pretty busy this summer so you don’t have to write often. Just let me know once in a while what is going on. Have you been selling a lot of lemonade lately? Sometimes in this hot jungle I would pay a dollar for a glass. But it never comes around. None of the little Vietnamese girls can make it like you and Helen. Well, I have to write some more letters. Once again, happy birthday and write me soon. Love, Edward.”

A lemonade in the jungle. Ed would need one often in the years to come. I wish I’d made him a few more. I wish I could stir one up for him now.